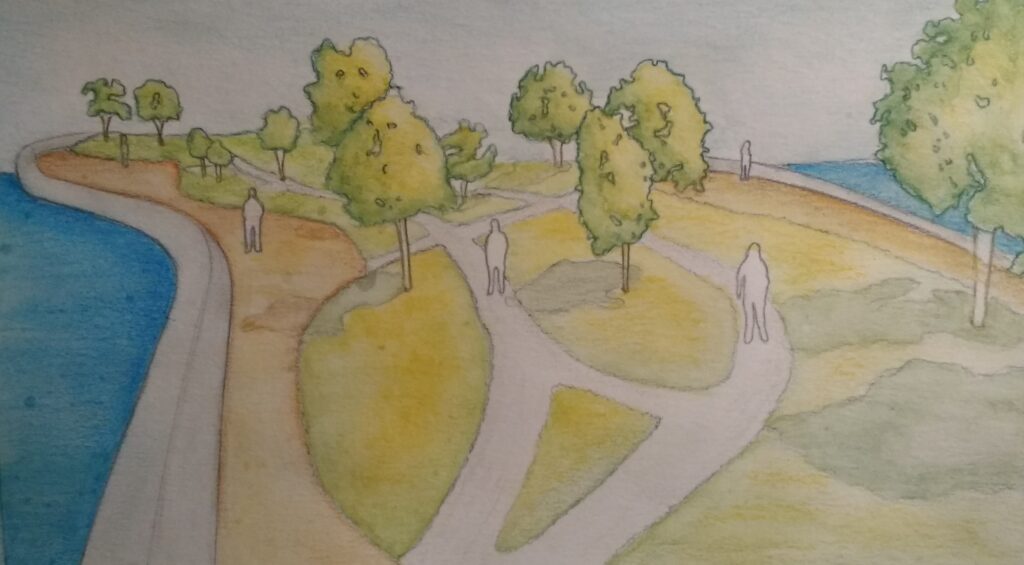 A graduate on the London College of Garden Design who has previously studied Art & Design as well as running a gardening business. With a keen eye on contemporary form and function, taking inspiration from nature, sculpture and architecture to create environments that are stimulating as well as serene.

The brief for this project was to find a location that is at least two acres and come up with a design for it. I ideally wanted the location to be within London, as I felt that London could always benefit from more green spaces. Also finding an area in the city that had two acres of free space was starting to become a problem, so I decided that it would be more plausible to design a park or green space that floats upon the River Thames and is docked at a location that is easy to reach, so that locals & tourists could visit and enjoy.
I chose the location to be beside the ExCel centre in Royal Victoria dock, as the area is becoming more residential and the people visiting ExCel could also enjoy. Also the dock itself is fairly enclosed, with very little water traffic
I wanted the look to be sleek and elegant with a modern design approach, I took some visual cues from luxury cruise liners, like the wood decking and the white hull. I also thought that a water feature would be a novel central piece with the walkways forming bridges over it. The trees would provide shade as well as focal points and the decking running along the outside would be for people wanting to enjoy the view. I also envisioned popup refreshment stalls, serving food & drinks as well as well as seating integrated into the decked area.
The planting I focused mainly on trees, with wild grass and aquatic plants in and around the water area. The trees I had in mind were a mixture of Acer rubrum dotted outside the perimeter, with Betula utilis jacquemontii in the middle section and Prunus serrula in the centre, surrounding the water feature.
I decided that a scale model as a final piece would capture the overall spirit of the design and subtle elevations in the land forms better than a computer rendering, as well as something tangible that you can see from any angle.