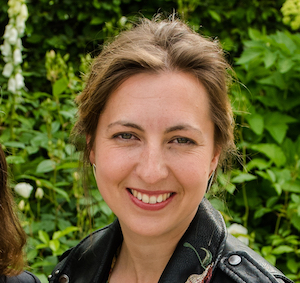 I graduated from the London College of Garden Design with a Diploma in Planting Design, in July 2017. During the course I was invited to exhibit at RHS Chelsea Flower Show with my co-designer Kate Savill, and our garden ’The Jo Whiley Scent Garden’ one of the BBC Radio Two ’Feel Good Gardens’.

I went through childhood with the good fortune of being able to indulge my curiosity for growing plants, with a particular interest in Cacti and Primulas, no doubt due to their un fussy requirements. However it was not until 2010 that I decided to pursue a career in horticulture, I had until then, been occupied with a career in Equestrian Sports and Arboriculture. Applying for a Historic and Botanic Gardens Bursary Scheme placement, I was selected to work as a trainee gardener at Sandringham Estate for a year, this gave me a fantastic grounding in a huge range of horticultural tasks as well as introducing me to the world of Garden Design. It was during this placement that I was given the opportunity to design and build my first show garden and in effect my first garden.

Having designed three award winning show gardens by 2013, I opened my design practise in the autumn and started a Garden Design Diploma with KLC School of Design. Since then I have been working on an extensive planting redesign project that has been on going for the last four years, various residential and commercial projects and continued to study.

In 2015 I was awarded the title of ’Young Designer of the Year’ at RHS Tatton Park Flower Show with my Gold medal winning ’The Sunset Garden’ and was announced as one of the 30 under 30: The Next Generation winners in 2016. This is an award which aims to highlight the achievements of 30 inspiring young people in the horticultural industry who have demonstrated passion, imagination, innovation and expertise in their chosen fields.

In 2017 I was invited to exhibit at RHS Chelsea Flower Show with my co-designer Kate Savill, and our garden ’The Jo Whiley Scent Garden’ one of the BBC Radio Two ’Feel Good Gardens’. This was a wonderful high and we both felt extremely proud of the finished garden, especially as we had only eight weeks from inception to breaking ground on site. Our design collaboration started after meeting as young designer of the year finalists, we both had an ambition to exhibit at Chelsea and so decided to join forces, it has proved to be extremely enjoyable and refreshing working together on our show garden projects. We are back in 2018 with an artisan garden ’The Warner Edwards Garden’.

My practise, Tamara Bridge Garden Designs is based in Norfolk, but I have undertaken work in France and Ireland.

This project is still in the design phase and will be constructed in 2018 alongside renovations to the existing house. It is part of a series of walled gardens and will be the first to undergo development. My brief was to design an exceptional garden, inspired by the gardens of Provence and be easily maintained. My inspiration was found on the nearby coastline and my landscape study was essential to ensure the new garden sat comfortably in its surroundings. This design aims to create a classic, elegant and timeless garden, that has a strong identity, ambience and sensitivity to the surrounding landscape and ecology, ensuring a dynamic and captivating scheme.

A collection of completed work across a range of projects